Warning: count(): Parameter must be an array or an object that implements Countable in /home/rustyeye/public_html/wp-content/plugins/contactme/contactmedotcom.php on line 30
 August | 2009 | the one... the only... RUSTY EYE

END_OF_DOCUMENT_TOKEN_TO_BE_REPLACED

Originality is the rarest of all commodities in today’s world of music. Heavy metal affords a bit more freedom to experiment than other styles, but finding something genuinely fresh and inviting is still largely a challenging task within this side stream art form. When looking for it, the first place recommended is that truly unrestrained lot of nonconformists known affectionately as the underground, where disturbing yet beautiful things await. Apply to this those most subterranean images of reanimated corpses, mortuaries, graveyards bound in mist and moonlight, and a vampire/Medusa hybrid with centipedes where the snakes should be, casting dark spells with pagan/demonic charms, and you have the face of Rusty Eye’s “Possessor”. END_OF_DOCUMENT_TOKEN_TO_BE_REPLACED 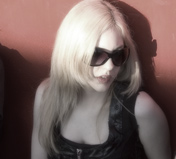 -How did you get into the heavier end of the music?

I got into Rock music at an early age, but in my teens I found out that I needed something heavier to fulfill my needs and I got introduced to the underground European Metal. Being raised in Mexico City helped to build a strong character in me, a truly devoted place to the subculture. END_OF_DOCUMENT_TOKEN_TO_BE_REPLACED

Figuring out LA trio Rusty Eye is a bit like trying to nail porridge to the wall. Listen to new album Possessor, or indeed any of its predecessors, and you’ll encounter much which is familiar, but totally alien at the same time. Like, it thrashes, it rocks, it progs and can stare down a zombie at 100 yards, but still sounds like something you’ve never heard before. Hallucinogenic, you could say if you’re willing to throw connotations of peace-loving, bandanna-wearing ’60s dudes out of the window. So, let’s make a stab at definition here: how does horror-soaked-tech-thrash ‘n’ roll sound? It rolls off the tongue beautifully doesn’t it? No? Oh well. “Awesome! Thrash ‘n’ roll…never heard that one before,” chuckles Mr Rust, the Eye’s bassist / vocalist, in unison with drummer / vocalist Miss Randall. “It has always been difficult to label our style because no one else is doing what we are doing. We’ve given up on coining any terms and will let others decide for themselves. We are definitely metal, that’s a fact!” END_OF_DOCUMENT_TOKEN_TO_BE_REPLACED