Warning: count(): Parameter must be an array or an object that implements Countable in /home/rustyeye/public_html/wp-content/plugins/contactme/contactmedotcom.php on line 30
 A Corroded Perception by Johnny Orlando Jr. | the one... the only... RUSTY EYE

Aldous Huxley once said, “After silence, that which comes nearest to expressing the inexpressible is music.” Rusty Eye is hopeful that exposure to their music will evoke such emotion or, at the very least, split your skull in half like a machete bisecting an earthworm.

Like so many other metal acts, Rusty Eye played its first show ever in 1995 at a school Christmas party in Mexico. 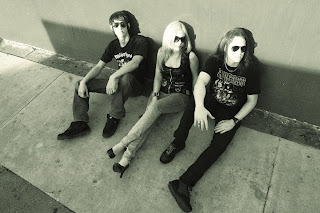 Okay fine, maybe that is not a terribly common starting point, however, Rusty Eye has come a long way since that first performance – both literally and figuratively.

Rusty Eye decided to pick up roots and head to Hollywood, despite the hoards of loyal fans that comprised the Mexican metal scene. The band simply found the lack of music industry support for heavy metal to be rather disenchanting. The bigger Mexican labels had no appetite for real metal and would not consider signing a band that did not sing its lyrics in Spanish. These poseur labels mainly promoted boy bands “disguised as real rock bands.” And frankly, Rusty Eye feels that going back to Mexico “would be like going back to square one.”

As a threshold matter, Rusty Eye believes that the corrosion of perception that pervades life in this world is beneficial and affords the aware with “a new way of seeing things in a different reality.” In this regard, Rusty Eye draws on horror film imagery and Existentialism for inspiration and lays down a sound that is progressive, provocative and increasingly cited as “hard-to-define.” And that’s the way they want it. To wit, who else but Miss Randall would encourage a cannibalistic captor to continue devouring the flesh of her lower leg?

With this said, Rusty Eye is a band firmly grounded in the present. Yet, the one word the band would like to use more in casual conversation is “imagine.” Imagine Miss Randall sitting still for a tattoo session to complete her Dario Argento-inspired sleeve whilst she dreams of letting the horror master kill her on film. Imagine Phantasm’s Tall Man yelling “Booooyyyy!!!!” in your direction as your legs turn to jelly and prevent your escape. Imagine a world not run by God and money. Imagine metal music featuring violins and Indian tabla. Imagine a world where a road- weary metal band can actually be discriminating in their breakfast choices. This is Rusty Eye’s reality.

Rusty Eye is on the verge of breaking their fifth release, Possessor, which promises 13 signature tracks and an increasingly polished sound. The artwork for the album has been done by renowned artist, Joe Petagno, best-known for creating Motörhead’s iconic mascot Snaggletooth.

Keep an eye out for Possessor this spring as Rusty Eye continues their quest to express the inexpressible. In the meantime, you might run in to Rusty Eye hanging out at the world famous Rainbow Bar & Grill…just follow the trail of empty Casillero del Diablo bottles.