While all these various “old-school” and “retro” movements going on these days are great for those of us who thrive on the glory that was yesterday’s metal, the bands who champion these scenes don’t have much going for them in the way of originality. Sure, the power does make up for lack of progression, but it would be nice to see a few acts out there that can deliver both. RUSTY EYE is one of those bands.

Rooted in classic thrash, this Hollywood-based trio plucks fruit from many a different tree for a sound that’s as enjoyable as it is indescribable. There’s just too much going on throughout the course of this album to classify it as belonging to any specific genre, but the overall vibe is one that tape traders from two decades ago could appreciate. Though only one element of this multi-faceted release, the infectious and energetic riffing of guitarist Baron Murtland brings a fist-pumping NWOBHM aura to the table. The best moments on “Possessor” come when Murtland goes off like a young James Hetfield rewriting early IRON MAIDEN riffs as he does on “11.02 Day Of The Dead” and “Those Who Flee From The Sun”. A dynamic and diverse player, Murtland shows some impressive soloing skills during “At The House By The Cemetery” and a penchant for melody during “Wings Of A Demon”.

The dual vocal attack of bassist Mr. Rust and drummer Miss Randall is another one the many attributes that sets RUSTY EYE apart from the rest of the back. The former carries with him a rather sinister bark while the latter’s often angelic voice plays a perfect yen to Mr. Rust‘s yang. At times, the combination can be a bit too overly theatrical, but on a tune like “Mondo Cane”, where shades of prog and goth rock infiltrate a galloping thrash fest, the pairing works perfectly.

Aside from the badass guitar playing, stylistic cornucopias and horror flick inspired lyrics that serve to remind us of a day before the “Twilight” movies turned vampires into pretty boys and that serial killers are our friends, RUSTY EYE‘s bread and butter is in their songwriting skills. To be simultaneously original and listenable is no easy feat these days, but this is one band that can pull it off. RUSTY EYE has a way of seamlessly moving their music in multiple directions at once, often without sacrificing the integrity of the song itself. Granted, they don’t always strike gold and parts of “Possessor” can pass by with little fanfare, but when these three are “on,” it’s goddamned impressive. 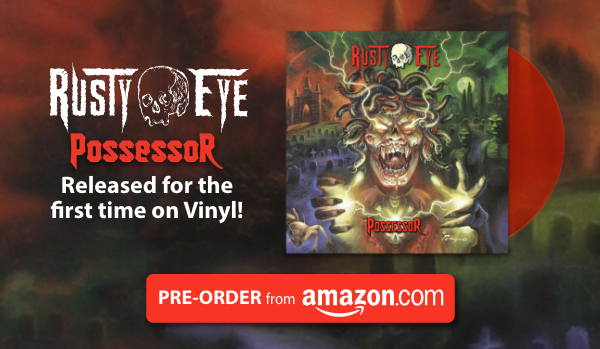 Rusty Eye “Possessor” released for the first time on Vinyl!

Rusty Eye at the Down n Out Review 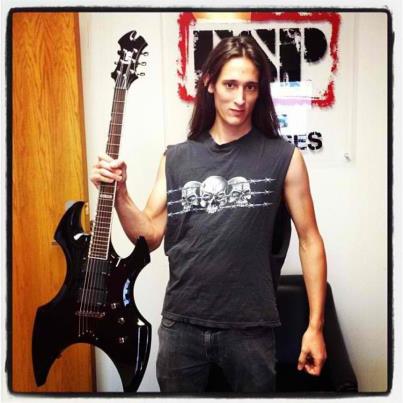