by aphotic
by Gregory Burkart Yeah, so I’ve said this before, but I can’t say it enough: Rusty Eye is one of the coolest horror-themed bands working today, to the point of redefining the whole concept of “horror metal.” Every aspect of their music – songwriting, performing style, production and visual presentation, the whole deal – reflects... Read More 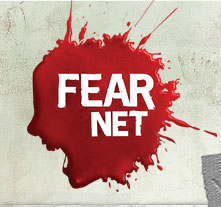 Yeah, so I’ve said this before, but I can’t say it enough: Rusty Eye is one of the coolest horror-themed bands working today, to the point of redefining the whole concept of “horror metal.” Every aspect of their music – songwriting, performing style, production and visual presentation, the whole deal – reflects the same passion for all things macabre that you FEARnet fiends share. But all that would be wasted if they weren’t also a technically solid, entertaining and insanely heavy band. The sonic proof’s all in there, evolving with each new release and proving that the LA-based trio isn’t just some Fulci-obsessed garage combo. Now Rusty Eye have released a new live record chronicling their April 2010 performance at the legendary Rainbow Bar & Grill, and I got to spend some quality ear-time with the album. Read on and I’ll drop some knowledge on ya…

One of the things that hit me immediately about Live at the Rainbow was the surprisingly intimate feel of the recording: while each vocal and instrument comes through with strength and clarity, there’s also a rough, imperfect edge to the sound that actually works in the album’s favor, capturing the closely-packed feel of the room and the energy of the crowd as the band commands them to “bang your fucking heads!” There’s an easy but intense dynamic going on between Mr. Rust (bass, heavy vocals), Miss Randall (drums, clean vocals) and Baron Murtland (guitar) that extends to the audience – who respond to the band’s old and new material with equal enthusiasm.

After the opening instrumental “At the House by the Cemetery,” the band charges immediately into the wild party tune “Day of the Dead” – not an homage to the Romero classic, but a thrilling celebration of Día de los Muertos (and a nod to the band’s Mexico City roots). The excellent “Zombie” is a great example of the band’s mix-and-match song technique, throwing prog-ish rhythms and flanged guitar swirls in a blender with punk-style vocal exchanges and an old-school breakdown. “Return of the Scarecrow” speeds headlong into insane but precise thrash, exploding into a black cloud of feedback and buzzing bass. Randall channels Heart’s Ann Wilson for “The Serial Kind,” a moody but strangely sexy down-tempo number.

“Those Who Flee From the Sun” begins with an impossibly low bass line from Rust and launches into steady, simple but infectious riffs and Randall’s blazing double-kick (you may recall from our interview that Randall is one of the world’s fastest drummers), making it a definite pit-churner. “Wings of a Demon” has a smooth, soaring feel, floating on Murtland’s intricate guitar figures, while “Birds of Prey” is a volatile mix of dirty punk and sleazy garage-rock. From the Rust ‘n’ Roll era, we get the sweet instrumental cut “Phantasm,” which combines driving and tough rhythms and smooth melodies, while the slower “Vermin” is more dreamlike with its reverb-soaked leads.

Returning to Possessor material, we get the excellent, surreal and catchy “Mondo Cane,” which gets meaner and rougher as it progresses to its violent climax. All three instruments are locked tight in the speedy arpeggios of horror punk/death metal mashup “Somnambulist Possession,” but there’s still room for a midway guitar rampage featuring some groovy harmonies. “Cryonic Suspension” has some great back-and-forth play, both vocally and between instruments, and the dark and smoldering anti-ballad “The Entity” makes for a chilling segue into the straightforward nasty hook and savage lyrics of early track “Certain Death,” which takes a mid-song side road into Goblin territory. The revenge tale “A Poisoned Letter” packs a lot of the same venomous rage, though not quite as musically interesting. Closing out the album are two of the best songs of the set: after a perfectly sick rendition of the wild and sleazy prog-metal classic “Mr. Cannibal,” the intricate bass lines and pogo-hopping rhythms of instrumental “Jerusalem Cricket Soufflé” put a perfect cap on the evening.

If you’re still catching up with the coolness and haven’t checked these guys out yet, this album is a perfect introduction to the morphing musical mania that is Rusty Eye. If you’re already a fan, the energy level of this recording will get you totally primed to check out their next gig as soon as possible. Either way, it’s highly recommended. No wait, fuck that… it’s actually required. So go get it. That’s an order.