Warning: count(): Parameter must be an array or an object that implements Countable in /home/rustyeye/public_html/wp-content/plugins/contactme/contactmedotcom.php on line 30
 Metal Edge Magazine. Rusty Eye Feature | the one... the only... RUSTY EYE

Some people’s fascination with Hollywood has nothing to do movie stars
or bogus reality TV. The motivation for Rusty Eye bassist/vocalist Mr.
Rust and drummer/vocalist Ms. Randall to leave Mexico City and move to
Hollywood is a more inspiring story. While the metaphorical meaning of
Rusty Eye is something about the corrosion of perception, these two
musicians’ ambition has been clear-eyed. Both became U.S. citizens and
graduated from Musicians Institute, and while working day jobs,
continuously wrote and recorded new music, playing gigs on the fabled
Sunset Strip and in the other sordid clubs of Los Angeles. Along with
the guitarist Tony “The Baron” Murtland, this thrash/progressive power
trio is gaining recognition as a serious act, not just some band with a
hot-looking chick drummer.

Mr. Rust, who was born in Tucson, AZ, formed Rusty Eye in Mexico City in
1995. Back to his early days, Rust, a guy who expressed himself freely,
was destined for greatness, or infamy. He’d been kicked out of Catholic
School as a pre-teen because they thought he was a Satanist. A
well-read, humorous, and soft-spoken dude off stage, the Eye’s front man
is a maniac onstage. 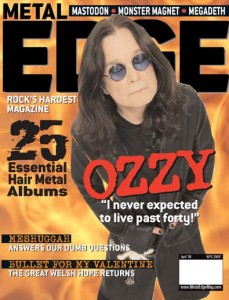 “It’s very radical to sing in English.” Rust explains about the Mexican
scene. “It’s culturally disrespectful, Mexican bands have to sing in
Spanish. There are underground bands who sing in English, but that’s
attached to a certain niche, like traditional death metal, black metal.
We weren’t part of the underground metal thing, we weren’t part of the
mainstream rock thing. We were in between.”

Ms. Randall’s story is inspiring for any aspiring musician. For the last
two years the annual NAMM Convention in Anaheim, she has amazed the
attendees (many of whom are veteran drummers), and in 2007, Randall was
a finalist in the “World’s Fastest Drummer” contest. To see and hear her
behind the kit during one of the band’s lacerating shows makes you
wonder how she became so good so quickly. And the girl can sing, whether
as a lead melodic vocal, or a guttural death growler complementing Mr.
Rust. Randall’s extraordinarily talented, and she’s consequently been
sought out by self-serving A&R people who’d like her to put down the
drumsticks and front an all-girl band.

“I’ve been a prog head since I was 14,” explains Randall, who cites Rush
drummer Neil Peart as being the one who made her want to pick up the
sticks. “I was always inclined to the percussion thing. In 2002 I met
the Rusty Eye guys and they needed a drummer, and I was like “Well, I’m
going to learn.” They believed in me, I got he drum set and started
playing, and after six months I learned all the songs and I finally
joined the band.”

Tony Murtland, aka “The Baron” is a Virginia transplant and the
unalloyed American of the trio. Oddly, Murtland admits to being a jazz
nerd, while he claims the late, great guitarist Chuck Schuldiner [Death]
was most influential to him growing up.

Currently, Rusty Eye is working on new material for their forthcoming
independent album – a follow-up to their 2006 release Stendhal
Syndrome – which is due to come out this summer. 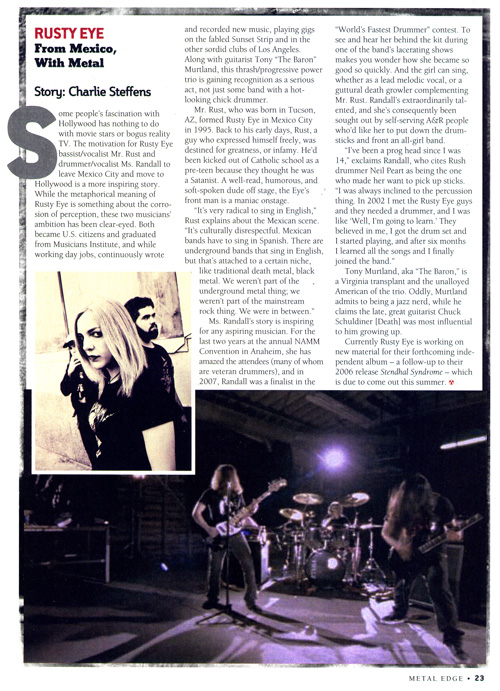