by aphotic
July 12, 2010 Reviewer: M.J Belched up from the feral streets of Hollywood, Rusty Eye has sprung back with a brand new album, Possessor, which once again has the band eviscerating the ears with unapologetic barbarity.  Rusty Eye’s inception occurred (purely coincidental) around the time of Babes in Toyland’s implosion and handily, the band has… 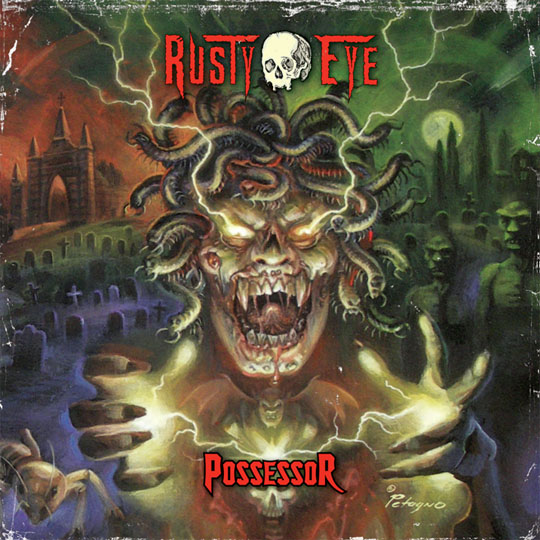 Belched up from the feral streets of Hollywood, Rusty Eye has sprung back with a brand new album, Possessor, which once again has the band eviscerating the ears with unapologetic barbarity.  Rusty Eye’s inception occurred (purely coincidental) around the time of Babes in Toyland’s implosion and handily, the band has taken over the reins of their riot grrrl inspired punk and melded it with a proggy Tool appreciation and a molten Venom-ous gurgle. What a fine mess they have gotten themselves into!

Possessor clicks into action like a low budget horror film with the short instrumental “At the House by the Cemetery”. Its “baying of a distant wolf” and “creaking of an opening door” samples, evoke imagery of the song title, reinforced by the warped “funhouse” guitar riff and funky percussion. The mood has been set as “11.02 Day of the Dead” opens with a guttural battle cry from bassist and main vocalist Mr. Rust. He is amply backed in this rousing call to arms by Miss Randall on drums and Baron Murtland on guitars. Miss Randall pulls double duty in the band, like Mr. Rust, by lending her baby doll vocals to this and many of the songs on Possessor. Even though the songs have a slightly unconventional nature, they never cease to captivate and reel the listener back in for more as the record progresses. There is no sense that the band is conforming to a particular structure or genre. They freely move from West Coast aggro punk right into a classic Maidenesque run processed through a death metal grinder. Vocally Miss Randall sings sweetly with a plaintive whine that stands in stark contrast to Mr. Rust aping a gruff Danzig dropped-down-a-key croak.

“Those Who Flee the Sun” is an awesome little grunter with double timed pacing and “more Maiden than Maiden” soloing courtesy of Baron Murtland. Miss Randall and Mr. Rust grind their message deeper into the psyche with a groove heavy bottom end.  “Wings of a Demon” is my favorite song here with it spoken word sections, yo-yoing lead tones and the wonderfully hellish sneered vocals. Its simplicity and sheer accessibility make it easy to enjoy. “Somnambulist Possession” saunters along like a little school girl on her way home from school – pigtails bouncing in time to the music in her head. She skips with nary a care; oblivious to the menacing world around her. Visuals like this represent the duality of the sickly sweet veneer smothering a sinister underbelly that tenaciously claws to show its true face through the sheen.

The degree of ferocity drops off after this with the mellow instrumental “Jerusalem Cricket Soufflé” and the quirky pop metal of “The Entity (Ghostly Lust)”. “A Poisoned Letter” brings back the blackened rasps with a punky edge. “Mandragora Screams” kicks up some magic dust before the final novelty sounding instrumental outro “Rituales de Sangre”. It leaves you feeling a bit creeped out and disoriented with it’s off kilter wackiness. Ultimately, you walk away from this album very satisfied knowing that Rusty Eye has done it again. Being possessed never felt quite this good.