Warning: count(): Parameter must be an array or an object that implements Countable in /home/rustyeye/public_html/wp-content/plugins/contactme/contactmedotcom.php on line 30
 Métaluna Magazine, France. “Possessor” Review | the one... the only... RUSTY EYE 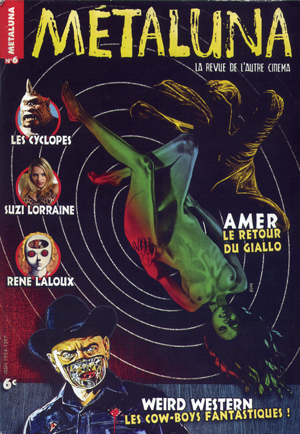 After the “Stendhal Syndrome” album which had marked the spirits, “Possessor”, the latest Rusty Eye is a great success. Always self-produced, the Hollywood trio has pulled up their sleeves and now can compete against the best bands of the genre. And I would say it plays real heavy! The instrumental “At the House by the Cemetery” immediately places the listener in the mood: right on a Revival Thrash/Heavy Metal spot and it plays fast and good. There’s barely time to recover when “11/02 Day of the Dead” kicks in, a powerful vitamin cocktail of Metal, sung by Mr. Rust, bass-growler/barker, and Miss Randall, aka Miss 3B (Beautiful Blonde Beater). Fans of horror movies will recognize the song titles (films of Lucio Fulci and George A. Romero, of course). And if Miss Randall seduces us at the beginning of “Mondo Cane”, she quickly shows that she’s not afraid to growl, before the synthetic and magnificent break by the great Claudio Simonetti, former leader of the legendary band Goblin … the same who wrote the great Dario Argento movie soundtracks! The loop is closed and Rusty Eye takes its influences with this title for Italian horror movie fans. This is really a very good album, which will please both Metalheads and horror movie fans. Available at Movies 2000 (49 Rue de La Rochefoucauld. 75009, Paris, France) and Gibert Jeune as an import.