Warning: count(): Parameter must be an array or an object that implements Countable in /home/rustyeye/public_html/wp-content/plugins/contactme/contactmedotcom.php on line 30
 “Rituales de Sangre” featured on “I Hate L.A.” movie trailer. | the one... the only... RUSTY EYE

Rusty Eye‘s experimental track “Rituales de Sangre” is featured on the trailer for the movie “I Hate L.A.” by Brenda & Elisabeth Fies. 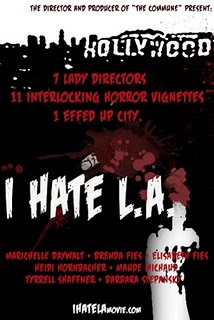 Big laughs mix with gory kills in this TWILIGHT ZONE-esqe suspenser when tension in Hollywood boils over and its inhabitants finally reveal the flawed monsters they really are.

Like PARIS JE T’AIME, each filmmaker set her short story in a specific region of L.A. county. Unlike the beautiful city of light, love, and culture, Los Angeles is perhaps the most hated and berated metropolis in the world. From the gnarled traffic, pervading loneliness and narcissism of its residents to the constant loss, rejection, and cruelty of tinsel town…each area of Los Angeles proper has a figurative and sometimes literal monster lurking near its sidewalks paved with stars.

Let these acclaimed Mistresses of Horror provide their uniquely devastating, no holds barred opinion of what makes the city of angels and hidden devils so profoundly effed up.