Warning: count(): Parameter must be an array or an object that implements Countable in /home/rustyeye/public_html/wp-content/plugins/contactme/contactmedotcom.php on line 30
 Rusty Eye Feature on Music Connection Magazine | the one... the only... RUSTY EYE 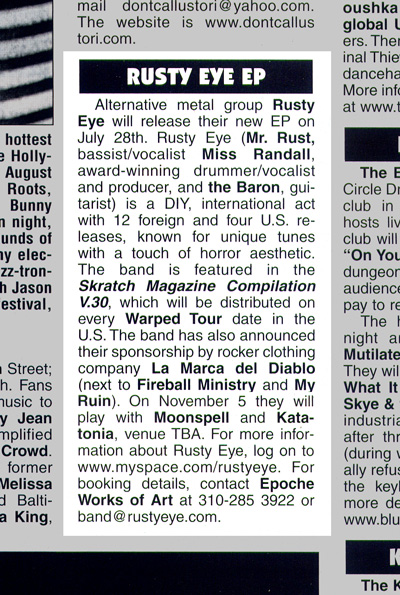 Alternative metal group Rusty Eye will release their new EP on July 28th. Rusty Eye (Mr. Rust- bassist/vocalist, Miss Randall- award-winning drummer/vocalist and producer, and The Baron- guitarist) is a DIY, international act with 12 foreign and 4 US releases know for unique tunes with a touch of horror aesthetic. The band is featured in the Skratch Magazine Compilation V.30, which will be distributed on every Warped Tour date in the US. The band has also announced their sponsorship by rocker clothing company La Marca del Diablo (next to Fireball Ministry and My Ruin). On November 5 they will playwith Moonspell and Katatonia, venue TBA. For more information about Rusty Eye, log on www.myspace.com/rustyeye.

About Music Connection: Published every other Thursday since 1977, Music Connection magazine is a bi-weekly music trade publication catering to the music industry, its loyal fans, and support services. From its unique vantage point, Music Connection magazine has, for more than two decades, set its sights on every aspect of the music business, from decision-making in corporate towers to performing in local clubs. Whether discussing raw survival or the factors contributing to breakthrough success, Music Connection examines and defines the realities of music making. Founded on the principle of bridging the gap between “the street and the elite,” Music Connection has garnered a solid foundation of active readers, and is commonly referred to as “the musicians bible.” This leading music trade magazine caters to the seasoned veteran as well as the fledgling musician, and to the top executive as well as those trying to break into the business. Its broad appeal encompasses the songwriter, producer, studio manager, agent, attorney, publicist, label executive and, of course, the professional and semi-pro musician. Music Connection magazine is distributed through a network of newsstands, bookstores, 7-Elevens, AM-PMs, record stores, and musical instrument stores, the readership is over 75,000. Seventy percent of the readership is in Southern California, five percent in Northern California, and the remaining twenty percent throughout every major city in the United States and several foreign countries.