The Dungeon Awaits Podcast. All Vinyl Show with Mr. Rust and Rusty Eye 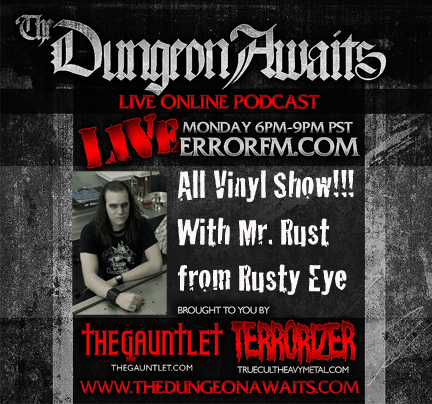 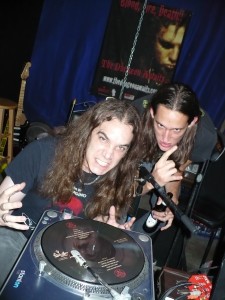 9/6/10 Mr. Rust, Miss Randall, and Tony from Rusty Eye rolled up to the Dungeon with a stack of some of the most essential metal vinyl, Dio himself probably had in his collection. When they were in the Dungeon last month for an interview (Thank you for hooking us up with them Colette Claire), Mr. Rust suggested, “We should do an all vinyl show.” Fuck yes. What emerged is one of the best shows we’ve ever done. Limited Edition Cathedral, Carnival Bizarre, Testament Live Album that can only be found on Vinyl, My Dying Bride early Demo with the singers home addres printed on the back! Iron Maiden, Grim Reaper, Danzig, and White Zombie, La Sexorcisto crackled and popped over the airwaves and an unfamiliar hiss echoed in the Dungeon for the first time. Mr. Rust offered to do a Vinyl show part two, once they get done mixing their new live album. Brandy Jarret, the new writer with the blackest and biggest tits in Metal called in with Jason Fisher from The Gauntlet to talk about the Top 10 Metal Duos she wanted to be double penetrated by. 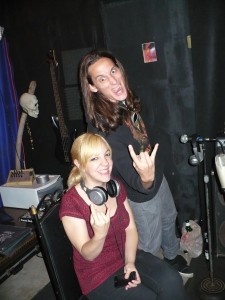 This was the first time I’ve had the pleasure of having Brandy on the show, and she is welcome anytime!!! I lost count how many times we talked about fingering her clit like a bass string… In other news, The answer is yes, I have officially changed my name from D-FLOx to Daniel Dungeon, after too many DFLO’s showed up on you tube playing third rate latino hip-hop. Despite the rumors you may have heard, I am not a hipster, that moonlights in the Dungeon in between doing video blogs in my bedroom playing a dulcimer. Let it be known however, during this difficult time, I am still debating on changing my name to: Oathwar, Leader of the Goat People, Cancerous Whore of the Transcendant Crysalis. Or, Vomitus Cunt the Pious, Unholy Slave of Salvation, and Bringer of the Third Age of Pestilence. Decisions, decisions… Send me an email and let me know what you think: thedungeonawaits@gmail.com Thanks Rusty Eye for stopping in, and we’ll see you next week!