by aphotic
Original Article CLICK HERE Rating: 4/5 Review online: October 6, 2010 Reviewed by: Christopher Foley It’s not often you can say something is original. However Hollywood’s Rusty Eye are just about as original as they come. The style encompasses a vast range of genres, as do the vocals which are all forged into a heavy... Read More 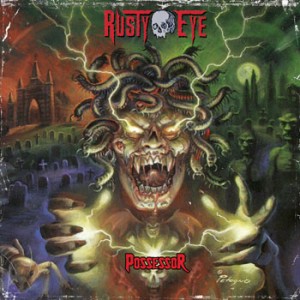 It’s not often you can say something is original. However Hollywood’s Rusty Eye are just about as original as they come. The style encompasses a vast range of genres, as do the vocals which are all forged into a heavy metal sound with a progressive touch. The production really has that garage band feel to it, which is quite lo-fi although it doesn’t affect any of the clarity in the overall sound. The vocal styles range from the varying vocal styles of Mr. Rust who delivers an array of extreme and clean vocals, as well as Miss Randall’s sultry female voice. Of course Mr. Rust and Miss Randall handle bass and drums respectively, with the three piece being rounded out by guitar player Baron Murtland.

These guys (and gal) have a penchant for horror films, which seeps through the writing evoking the feel of an old black and white horror movie. The songs on offer are a real mixed bag, ranging from your standard metal fare with strong NWOBHM influence, to some more punkish numbers of course with a few instrumentals and surprises in between. The guitar work is really reminiscent of Slough Feg, although there are a few nifty thrash parts thrown in, and some doom too. Mr. Rust’s bass guitar work really stands out and is perfectly audible throughout the album, showing some of his coolest chops in “Jerusalem Cricket Soufflé”. The vast majority of the tracks stand out as pretty cool on here so I won’t point any out. This probably won’t appeal to everyone, reeking of pure underground charm. However Possessor is a very interesting listen that is equally as enjoyable as it is intriguing, invoking the spirit of the 80’s, this is magic.