Warning: count(): Parameter must be an array or an object that implements Countable in /home/rustyeye/public_html/wp-content/plugins/contactme/contactmedotcom.php on line 30
 Thrash Hits. “Possessor” Review | the one... the only... RUSTY EYE 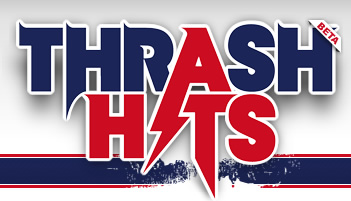 Now, I’m not one for exaggeration so you can take this as gospel truth; this emission by a three-piece out of Hollywood, California will be by some considerable margin the most unique sound you’ll hear anytime soon.

Mixed by Jeremy Blair (Guns N’ Roses, Fear Factory) and produced by Miss Randall; the band’s drummer and singer, it also benefits from the work of legendary Italian composer Claudio Simonetti whose impressive film canon stretches to seminal work like George Romero’s Dawn of the Dead.

Not content with that, the band have also called in a guest appearance from Circus of Power’s Alex Mitchell and have appropriately grisly album artwork carved out by Joe Petagno of Motorhead renown.

The result is a technically bewildering array of tracks, each one akin to a short horror movie with the kind of macabre and baroque overtones you’d find in the darkest recess of Tim Burton’s mind. Take opener ‘At the house by the cemetery’ for example, where we’re instantly reminded how good Iron Maiden’s debut was and that ear for the progressive is present elsewhere too underpinned by a rock-solid tightness which belies their three-piece status.

Poles apart is ‘Mondo Cane’ which owes more of a debt to thrash with a wild combination of black metal rasps mixed with Miss Randall’s tuneful but extremely scary harmonies – insanely unusual. It ends with the howl of a Police siren and that, given what’s just transpired, is not the only emergency service that’s needed. ‘Poisoned Letter’ is of more restrained tempo but carries no less menace with Miss Randall again trading vocal duties with what sounds like Satan himself in a disturbing tale of revenge; violent one would assume.

Elsewhere you’ll find other gems like ‘11.02 Day of The Dead’ which powers along with an infectious riff en-route to a killer mid–section and the utterly bewildering ‘Somnambulist Possession’, which, apart from recalling early Rush, offers a short, killer guitar solo which more than makes up for the somewhat confusing song title.

Watch the award-winning video to ‘Mr. Cannibal’ by Rusty Eye

Attempts to jam all of this into any kind of pigeon-hole will only lead to disappointment, and that in itself is only one of the many pluses that this unique record has to offer. Focusing on themes of lost perception and drawing hugely from the classic horror movie genre; Rusty Eye have come up with something completely new while maintaining a healthy grip on some of the best of metal’s past.

Dial in the considerable weight of individual enthusiasm and technical expertise that they bring to the table and there’s surely much more to come; a fact not lost on the LA Music awards who voted their 2006 video ‘Mr Cannibal’ Best Metal single.

Sounds like: early Maiden, early Rush and a host of NWOBHM others…
Top tracks: Mondo Cane, 11.02 Day of the Dead, A Poisoned Letter

Rusty Eye – Possessor tracklisting
At the house by the cemetery (intro)
11.02 Day of the dead
Mondo Cane
The Serial Kind
Those who flee from the sun
Wings of a demon
Malefice (Intermission)
Somnambulist Possession
Jerusalem Cricket Soufflé
The Entity (Ghostly Lust)
A Poisoned Letter
Mandragora Screams
Rituales de Sangre (Outro)